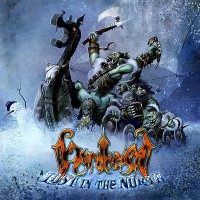 On a very hot summer day, I get a Canadian album about the cold north in front of me. Fortunately I can always listen to this kinds of albums.

Mysteriously and mystical is the beginning of this album, and it makes me curious about what’s else is waiting for me. The intro is almost too long, but it remains beautiful. Then, for a second, you think you’re listening to the new Ensiferum, fortunately this feeling disappears almost immediately. You’ll notice that this band has got a style of it’s own which is somewhere between Falkenbach and the Nightcreepers. It’s a nice album, not something you’ve never heard before, but it’s nice besides the rest. It’s a pity the keyboard isn’t perfectly mixed every now and then, it makes that the keys are up the music, instead of in it. The first few songs are just nice, but then there is a song called “Beer, metal, trolls and vomit!” a song that sounds like Aktarum first. One of my folk-metal colleges told me he found it a bit Korpiklaani alike. I’m sure that this is because the lyrics “Beer, beer, beer, metal trolls and vomit!” are on the same rythm as “Here we had built our cottages and saunas”. This is by far the worst song on the album. BUT not much later it’s time for Glorious March. An awesome heroic song full of pride and honour, but brutal violence as well! There’s enough switches between grunts and heroic clean vocals. Great song! After this de music remains in the Nordheim-style, rough, keyboard and with both clean and brute vocals.

If you know that this album is produced by themselves, there’s nothing wrong with it. Sometimes it’s not mixed perfectly, but well, that happens if you do it yourself. Perhaps this album isn’t perfect, but it’s surely a good thing to look these guys up and listen to some of there stuff. And if you do, I recommend you to listen Glorious March.