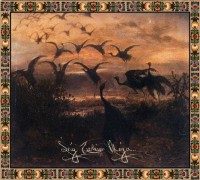 Sometimes, but just sometimes, you’re quickly finished as a reviewer. This was also the case with the split of Stworz and Fall. Stworz is a Polish Pagan-metal band, Fall is another band that specializes in black / doom-metal. Together they have a released a split-CD with the theme ‘autumn’.
Stworz takes a first little step towards the folk on this album. Something which will be expanded on his next album.
There is little to say about this split, because both bands only released 5 songs in total. Not enough to have a clear picture of what exactly is the intention. The part of Stworz even begins with an acoustic intro, leaving only 2 songs to listen to the bands full potential. But hey, you need to do something, right?

Musically, this split starts well with the acoustic intro of Stworz. Atmospheric, and several sounds for the melody ensure this piece gets a nice melancholic sound. The second and third song are typical pagan black metal. The first song sounds a bit more ‘Folk’ with some short pieces of flute. In my opinion it’d be better if it had been left out; it sounds pretty cheap and doesn’t fit the rest of the music. The third song is mainly raw black-metal with an occasional acoustic interlude. Where the black-metal parts used mainly screams, the acoustic piece is sung with clean vocals.

With this, the part of Stworz is already finished. It all sounds very basic, and nowhere is it really special. You cannot really get the right feeling when listening to this record, since it’s already finished after two and a half song. Bit of a missed opportunity in my eyes.

Although it is besides our speciality, I want to dedicate a few sentences to the portion of Fall, a band that approached this split better. This band has put two long songs (8 and 12 minutes) on the split, where you can clearly hear what the band stands for; atmospheric doom / black metal. Nice build-up, very attractive and nice to listen. Stworz could use this as an example!