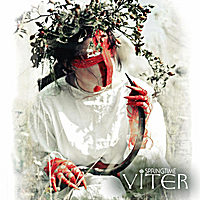 Viter is a relatively new Oekrain band, making Folk’n’Industrial according to themselves. A description which will make a lot of people ask themselves ‘what should I do with it?’ But let it be clear from the beginning, Viter is different. And despite the fact the industrial sound is the strongest, but there are surely folkinstruments in it. It sounds like an impossible combination but it isn’t, Viter proves it.
The CD was realesed single by single over a couple of weeks and this was a great idea. I was often very curious how the next song should sound, because there is a nice variation in the tracks. They fit together, but don’t look like each other.
The album is released completely now and it sounds nice. Personally I like the song Marichka the most. It’s by the way an acception in the way there’s is an accent in the English vocals, but this also gives a nice weird twist to the song. The lyrics are simple and have no real higher goal, but the bass and the whistles are delicious.
Viter has build out the concept of their previous songs. Maybe some people can’t appreciate the mix of folk en industrial, but I expect there are also a lot of people who like this a lot.