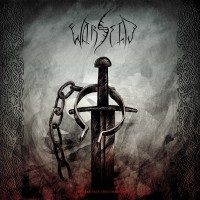 Warseid releases another EP, with the fantastic title “Where Fate Lies Unbound”.
It’s immediatelly clear this is an Northern American band, the music of this kind of bands is somewhat polished to our European standards. Another thing which is obvious is the symphonic element from their ‘symphonic folk-metal’. After a nice intro with some quiet guitar, and a somewhat to smooth phrase, the track hits of with a raw rough voice and becomes quite nice.
Also ‘Frost Upon the Embers’ is a nice track in which symphonic keys make a nice contrast with the vocals.
At the third track I begin to miss the folk-influences a little, I can appreciate the music, but I’m not hearing a lot of folky tunes.
The last track is the over 11 minutes long ‘Farewell’. It’s a story on his own with a beautiful intro with acoustic guitar. After this clean vocals, and in the third minute of the track it speeds up a little and then it becomes a lot rougher. The raw voice is somewhat forced, but this gives the song a nice flavor. The track bursts out with changes and one of this elements has a nice folky tune. When the main character of this song made hir Farewell and dies, the track ends with a nice and quiet outro. Wow, a very nice track which is a the best track by far.

An album on which the emphasis is on the symphonic elements and not on the folk-metal. But this is put right in the last track, which combines these two. The last track only makes this album worthwhile.