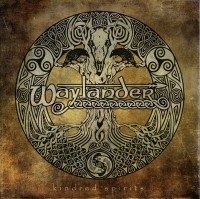 Waylander, a band known by most of us, a band which with us for about 300 years and will continue to do so, but has never got out of the average bands, until…

Everybody who knows Waylander, and everybody who knows me, knows the music of the Northern Irish fits me perfectly, a lot of metal and a lot of folk. But Waylander is not my favourite band by far, because they were never really good, with the emphasis on was. Kindred Spirits is the beginning of a whole new era!

Let’s start with the only negative aspect of this album, I love an marvelous intro. Kindred Spirits opens immediatelly with a ‘violent’ track, but after three notes it sucks you all in. ‘Echoes of the Sidhe’ is the beginning of a new storm of Celtic wars! helemaal mee. Echoes of the Sidhe is het begin van een nieuwe stormvloed van Keltische oorlogen! At last they’ve found a perfect mix between all elements and the vocals are not thrown roughly on top of everything else. The track slowly fades out and nice acoustic guitars come in, followed by a ‘wall of death moment’!
The second track of this CD is a delicious track which you can listen to for hours. And it’s followed by two of the best tracks of this album, ‘Twin Fires of Beltune’ and ‘Of Fear and Fury’. Fantastic catchy tracks, in which you can sing-a-long, tracks to let yourselve get loose and on top of this hard and rough.
The record goes on with fantastic raw metal and marvelous Celtic folk when we finally get to the last track, ‘Kindred Spirits’. Another one of the typical tracks of this CD which is really wrapping it up. ‘We are kindred of spirit, our thoughts are as one!’

At the end of this 53 minutes of celtic metal, Waylander has won me over! At last a huge magnificent album of these experienced Northern Irishmen. A CD which may nog fail in your collection!