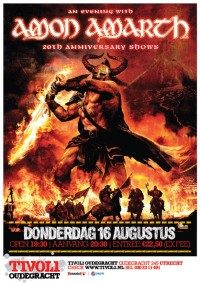 Already 20 years these 5 Swedish men are working hard on their career. With their melodic death metal with lyrics about Vikings and Norse mythology, they have already conquered many hearts, something that would prove even more tonight. I’m talking of course about none other than Amon Amarth, the band which celebrated their 20th birthday party the Tivoli, Utrecht.

And that this would be a special party was already clear in advance. Sold out at the last minute, no support act and almost two and a half hours to enjoy the best of Amon Amarth! 2 full sets, with a short pause between each, was what would be played tonight.

The setlist was a varied summary of what Amon Amarth has achieved in 20 years. Not only they played hits like “Death in Fire” and “Runes to my Memory”, also there was enough attention to recent work, with for example ‘War of the gods’. The first demo was cited with ‘The Arrival of the Fimbul Winter’. A varied setlist, where the alternation between old and new, hits and obscure songs was the central focus for the night.

The show was as you could expect from Amon Amarth, tight, enthusiastic and just incredibly good. Although the band had to cope with a bad sound earlier in the show, later the sound became better. However, the vocals remained too low in the mix for the rest of the show. The atmosphere was perfect, and since opener “War of the Gods’ a swirling pit burst loose that would not stop until the end of the concert.

Yet there was not only room for Amon Amarth on stage this evening. The band invited their Dutch friends from Legion of the Damned to play two songs, so Amon Amarth could take a break. A welcoming variety, although the audience didn’t know really well how to react to this Dutch black / thrash metal.

All in all, Amon Amarth gave the fans a perfect birthday gift with this 20 year anniversary show. There was something to enjoy for everybody, whether you’re a fan of old or new stuff. The atmosphere was exuberant, what was shown by the singing and the many fists in the air. On to the next 20 years!
Score: 8/10