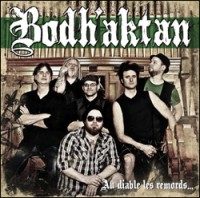 We’ve get ‘Au diable les remord’ by Bodh’aktan thrown on our desk. We have two problems at once. The first, I can tell you immediately. I’d never heard of this band. Well, it turns out to be a Canadian Celtic Punkband. From Quebec to be more precise and I say this for a reason. The lyrics are in French as we may expect form this French part of Canada. I will tell you about my other problem later.
When you are in a bad mood. It’s sometimes nice to put on some folk-metalviolence so you can imagine you’re in the front row going in to battle to slaughter the evil. But you can also put Bokh’aktan into your CD-plaer. The second option is a guarantee you don’t stay in a bad mood.
I’m don’t know a lot of French language but the three captain in the first track of the album point out very clearly what the band is up to. Nice merry Celtic folk with a nice solid coating. Put the music on and try to sit still, you just can’t…
Rum and women, that’s what you need, apparently these French-speaking fellows know it too, the second track is a nice happy track again.
And it goes on like this, in ‘Commencons la semaine’ whe can hear what a great production this record is. All flutes, accordion, violin etc. can be heard very clearly. Wonderful to listen too.
‘A boire’ has some more guitar compared to the other tracks, but this is not a bad thing, the song has a nice bagpipe in the background. Great, the album goes on and on like this.
A whole lot of nice up-tempo tracks make you wonder if they ever get tired, where do they get this energy, the party goes on.
Until the ballad ‘La ballade de Jonathan Lewis’, so a ballad…. Oh, no, not yeat, after a little more than one minute it turns out to be just as speedy as the rest . The inevitable slow song is kept to the last track of this album. I’m not a fan of those slow tracks by this kind of bands, but it seems to go with the genre, so I shall not make a fuss out of it.
A very tasty debut-album by Bodh’aktan. Very happy, speedy en very well produced. Everything, and that’s a whole lot with Bodh’aktan can be heard very clearly.
This all gets me back to my second problem, I can get myself to turn it off. Just once again, and again and again and….