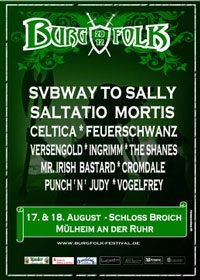 As every year we make our journey to castle Broich, where on the innerplace the amazing Burgfolk is held.
This year there was no folkmetal, so we came here for the large amount of folkrock bands, who came to show us what they’ve got.

It was pretty hot when we arrived at the castle where everything was going to happen this weekend. And I’ll start with one of (few) things this festival can work on. The entrance was really slow, which caused that some people had to miss a part from the first band, because they where still standing at the castlegates.

Talking about this first band, Punch ‘n’ Judy was the opener of the festival, and with their piratefolk they gave away many uptempo songs on which you can dance very well. The band is walking on the edge of our website, but most of their music is not rock enough for Folk-metal.nl. Though I have to say that this is a very nice band to see once, however the singer sometimes doesn’t make the contact with the public in the right way. But the biggest problem was the heat, it was just to hot to dance or jump or whatever you’d like.

After the pirates, it was time for “hard polka” with The Shanes. A band with some good parts every now and then, but generally it was nothing more then a middle class band. But I must say, it is a good thing that these guys are making exactly what they say, hard polka!

Then it’s time for met und tanz (mead and dance), mit spielmanskorps Feuerschwanz! The knights who fight with different kind of lances march on stage, cheerful as ever. With a show that makes no sence at all and a real metmachine (meadmachine) on stage, these men and women always know how to conjure a bunch of people into a partying mass. All their awesome happy hits were played. But one thing must be cleared about this band, Sie sind verteidiger des wahre met! (they’re defenders of the real mead)

Last band of the first evening is Subway to Sally. It’s obvious a lot of people didn’t want to miss this band and the audience was ready for it. When they start with ‘Kampfen wir!’ they have a terrible bad sound, there a loud noise through the whole mix. After three songs this becomes better but it doesn’t disappear entirely during the whole show. This is a pity, because it’s the only thing the show is lacking. The rest of the show is perfect. The setlist is a true masterpiece. The set starts of with grimm and harsh block, we already mentioned Kampfen wir but also songs as ‘Schlagt die Glocken’, it reaches the top with ‘Schwarz Meer’. Which means a wake-up call for all crowdsurfers, and they surfing, lots of them. And of course frontman Eric Fish shows the crowd can carry him too. Very impressive first part of the show. They have the audience in the pocket already but there’s more to come. There’s now also room for some less harsh songs with songs like ‘Besser du Ranst’, causing a huge circlepit. We also get a fabulous piece of spitting fire by the band.

The regular set ends with a medley of ‘Sieben’, Ohne Liebe’ and ‘Veitstanz’. Of course this isn’t enought for the delirious crowd and when they come back we get a nice song about the coming? end of times ‘MMXII’, and when they leave the stage again you know they will come back for ‘Julia und der Rauber’. A performance where everyone goes out of his mind, not only the ‘normal’ youth but also the older fans and it’s simply beautiful to see a little girl sitting on someone’s shoulders with earprotectors and shining eyes. The lightshow in her eyes said it all: Fabulous!
Score: 9/10

Just like last year we go back to a hotel in the area to rest a bit. So we can come back the day after in the burning heat.

The first band on Saturday was Vogelfrey. De pakt der geächteten was asked to start the day with their happy folkrock. Two weeks ago I’ve seen these Germands on Wacken Open Air and after this experience, it was a little disappointment. The music was good and singer Jannik is weird as always. But I missed the party and everyone going wild, this wasn’t possible because of the heat. Everyone was taking cover under the big tree or near the castlebuildings. Never the less, Vogelfrey just continued and I couldn’t catch them on big mistakes. For me Vogelfrey is just a folkrockband like many other, though I love to see them live, and for that, all the credits go to Jannik. This guy is completely insane and he proves it during the gig. A good example is the song Galgenvogel, a song where an executor shows up on stage to tie Jannik up. At the end of the song Jannik is chasing the man with the rope on stage, of stage and on stage again trying to hit the guy. As well the song Feenfleisch is something to enjoy. And the fact that you can bite of the head of a winged barbiedoll while having a bloodcapsule in your mouth. It’s funny everytime. Unless the lack of sphere (which was fully caused by the weather and not by the band) Vogelfrey was a good start of the day.
Score: 8/10

Cromdale
Following up after Vogelfrey was Cromdale. Hard folk music, sometimes a bit rock, but calm most of the time. A band who definitely stood at the right festival, though it’s too soft to have these guys on our site.

Ingrimm
Then it’s time for Ingrimm, a band where the CDs and the concert are two completely different things. On the CD Ingrimm is peaceful and even for folkrock it’s soft, but the guys play really rough music on stage. Live Ingrimm even may be the shackle between folkrock and folkmetal. But these guys had to be melting up there! If you play between three and four in the midday in the burning heat for forty-five minutes in full leather armor under the hot lamps. Ingrimm showed a pretty good show, however the frontman isn’t always as good. Not in the contact with the crowd and neither his qualities as a singer. But a band with much bagpipes. Hurdy-gurdy and violin which really adds something to the sound. Something I’ve learned from these people on Burgfolk was, don’t stand on the cable…. it will break, such a shame we had to miss the violin for a while because of that.
Score: 7/10

Mr. Irish Bastard
Mr. Irish Bastard, they say they’re a folkpunk band. Actually pretty soft and often slow music. What a terrible mess it was during the soundcheck by the way, an accordion with trouble is slowing everything down. And then when you decide to start, the electric guitar and the bass guitar aren’t working (properly), a weird decision to start. It took severall songs to fix all this, and then you still have the problem of a frontman who makes some funny jokes, but these take too long, and then he’s not a very good singer after all…
It’s funny if you’re definitely not slim and threaten people to undress yourself if the crowd wouldn’t dance. And instead of everyone dancing and jumping, the crowd just shouts “Ausziehen” (undress) at you. In the end, you can’t do anything else then just show your butt….
And like this there where many jokes, but the music could have been better.
Score: 6/10

Versengold
Then it was time for one of my personal favorites on the festival. A band I’ve seen several times before and that makes me feel happy every time I see them. And unless I always prefer metal, this is just pure folk without any electric instrument. Versengold, the drunkenrotters from the pubs of Germany. They make everyone happy and everything cheerful with their folktunes and they really make an amazing sphere with dancing and jumping for every age.

Celtica
The for last band was Celtica, pipes rock!
A black and read group with bagpipes and rock and a good eye for detail on their show. This weird band played an amount of own songs, but the best where the medleys from songs like smoke on the water, highway to hell and we will rock you. Something this band misses a bit is vocal work. There is almost no text and a good singer would add something to their music in my opinion. Something they do have is a tiny fireshow. Overall this is a good band to see live, and I think there’s still more potency in it.
Score: 7/10

Saltatio Mortis
At last there was the grand final on the festival, a band which makes my festival summer complete, Saltatio Mortis! With a setlist containing one hour and forty-five minutes of fast danceable songs and lots of acrobatically tricks these Mittelalterrockers show us that they know how to give a good show away. However personally I think Alea, with all his good intentions is trying a bit too hard to get the crowd clapping and shouting. This leaves not much space for headbanging or moshing, in my opinion he doesn’t have to do that. Never the less it’s still very awesome if you can sing that perfect during all the flying jumpkicks, saults and cartwheels, even if you plank all over the crowd. The music is known for the use of two or three bagpipes at the same time and as well they use hurdy-gurdys and morahapa, which doesn’t only make the music folky, as well really exciting. You can say that Saltatio Mortis wasn’t playing as perfect as Friday’s last band Subway to Sally, but they don’t need it when you make uptempo danceable music like this. This was a close to perfect gig from these Germans!
Score: 9/10

For me, this festivalweekend was awesome as Burgfolk always is. So we will definitely be back next year, because this is a party you can’t miss! Michael Bohnes did it again! What a very very nice festival. It’s no wonder de audience and a lot of the bands almost worship this man!
And this year also a special ‘Big Thank You’ for all the bands who gave the full 100% ore more on this very very hot day.

You can find lots of pictures at: Feenstaub Entertainment.