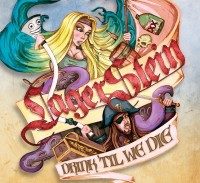 Pirate-metal is hot. Just look Alestorm, doing really well nowadays, playing everywhere and nowhere and still release albums on a regular base. As always the success attracts other bands who try to be just as successful as their popular counterparts. Lagerstein is such a band.
Alestorm-clone … I mean Lagerstein plays Pirate Metal. You know not what you can expect? Listen to any CD of Alestorm and you know how it sounds! Of course there are small differences. Lagerstein sounds slightly less polished and slightly ‘rougher’. The formula is known; cheerful keyboard melodies, heavy guitars and lyrics about alcohol abuse and the pirate life.

But does this mean that it’s awful?? Certainly not! It all sounds very nice, although the can sound a bit whiny at times. The band scores bonus points for their ridiculous cover of The Lonely Island’s ‘I’m on a Boat’, awesome!

For fans of Alestorm it’s definitely worth it to listen for free at bandcamp. Aren’t you a fan of Alestorm? Do not bother, because then this will never appeal to you!