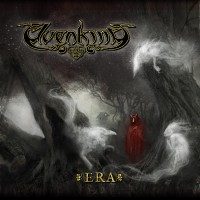 One of the bands walking on the lines of folk and powermetal. Elvenking has a very catchy sound and sometimes it’s almost popmusic. Never the less is it one of my favourites and so I was very happy I got the honour to write this review on Era.
The band said that this new era is a review on their own roots and their career. An album with more folk then any of the previous albums, which was possible because of the help of Maurizio Cardull from Folkstone. He played several folkloric instruments on this record.

Elvenkings lyrics aren’t always as folk-minded, so the first song is called “The Loser”. The CD starts with a few seconds of Children of Bodom alike sounds, then a delightful guitar riff that breathes powermetal, and then the violin drops in so the sound breathes Elvenking again. Within a minute I’m already very happy with this job to write Elvenking as Damna opens his mouth and sings with his unique vocals. And of course, Elvenkings sound is as catchy as always. As they’ve pronounced themselves, there’s more folk on this album, which is clear with so much more violins, this makes me so much happier with the album.
“Midnight Skies, Winter Sighs” increases the level of folk even more. The pace of this song is obviously lower then the first few songs, but with an overdose of violin and the flute of Maurizio in it, this sounds very good! Elvenking as well made clear that all the known elements of the band are in this album, which brings us to the bridge of this song that immediately reminds you of “The Scythe” album. This all without the music to sound like “too much”
After this, there’s a song called “A song for the people”, there’s no metal in it, but there is an lovely folk tune. Beautiful and a very good multeity in the music.
Funny enough after this pure folk tune, there’s the least folky song of the tape, “We Animals”. The song shows us that Elvenking definitely has their roots in the powermetal.
After a few more up-tempo folk-powermetal Elvenking-styled songs it’s time for a love ballad, “Forget-me-not”. This as well is something Elvenking does extraordinary good!
“The time of your life” is a song in the style like “My own spiders web” and immediately reminds you of the acoustic album from 2008.
“Chronicle of a frozen era” is the last up-tempo song you’ll hear on the album, and as well one of the best songs on it.
Then we have “Ophale” a very surprising way to end this album, but a very good one! Only an acoustic guitar and an beautiful flute in this song which really gives you goose pockets.

Any advice if you should buy this CD? No doubts! Buy it right away! A really must-have for every fan of not-standard folk-metal! A real masterpiece is what these Italians delivered with this album! I love it!