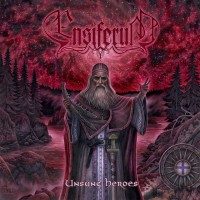 It was quiet for a while in the camp of Ensiferum. The last we heard from them was “From Afar” which dates from 2009. But when the summer came, we heard signs that these Finns are still alive, and preparing for a new album. Slowly we were tempted for this new studio album, with ‘Burning Leaves’ that was played live, and the video for “In My sword I trust’ which was recently released.

Now the hour is finally there, the release of ‘Unsung Heroes’, already the fifth studio album by these guys. Because Ensiferum always guarantees quality, my expectations were high for this one.

However , my expectations were only partially met. Ensiferum releases with ‘Unsung Heroes’ a strong album, but it can’t compete with earlier work. The reason is that the band focuses more on the epic and theatrical, instead of solid strong metal-songs. Still, these harsh metal-songs can still be heard. Listen for example to “In My sword I trust”. ‘Unsung Heroes’, thereafter, has a beautiful melancholic undertone, really nice! ‘Celestial Bond’ reminds me of the song “Tears” that we know from the album ‘Iron’. This is mainly due to the almost fragile nature of the song, and of course the female vocals.

What appears to be continuing a tradition in Ensiferum is to add a long epic of more than 10 minutes. We saw it already in “Victory Song” and “The Heathen Throne’. This time the song is entitled “Passion Proof Power’. I feel that this song is a complete miss. It is no longer a whole as in previous songs, but it sounds like a lot of small pieces are put together. It sounds more like they wrote the song, just to have a long song on the album. Too bad, because I can always appreciate the long Ensiferum-songs!

All in all Ensiferum takes some elements further on this album. It sounds more epic, grander, while slightly more folk. Nevertheless, I miss a bit of the power of the previous albums. It’s all just a bit slower, but nevertheless remains fine to keep your head banging! Ensiferum delivers quality again with this new album. However, it should be said that this CD is significantly less catchy than its predecessors, and it needs a few spins before the full potential of the record reveals itself.