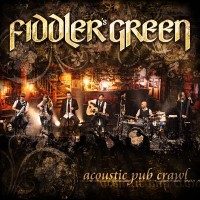 After an impressive number of CD’s and a couple of DVD’s Fiddler’s Green is obviously into something else. They’re doing an huge acoustic tour en releasing an albumalong with this. ‘Acoustic Club Crawl’, it’s obvious such an album will not sound as heavy as we’re used to by this band. But at Folk-metal.nl we like to pick up such little side-trips by bands, because they keep it fun….
So we won’t want to withhold you a review on this one.
An acoustic album, not as heavy as we’re used to but it’s not an album to sit back and relax, this is clear from the start when they open with ‘Irish Rover’. This sounds nice and I want to hear more! The album is recorded during the first gigs of this tour, so it’s a live album and songs are announced sometimes very short and sometimes with a little chat, like we’re used to live. This nicely done, a little joke every now and then but never boring long talks where you feel you have to adjust the volume.
Of course there are besides some more upspeed songs also some nice and easy ones like ‘Rose in the Heather’. There are some of their famous songs on this album like ‘Don’t Come Again’, ‘Highland Road’ and ‘Folk’s Not Dead’, but there are also unkown songs like ‘Cripple Creek’.
Fiddler’s Green shows they are also good at this discipline. When you play acoustic every little failure can be heard. But this sounds very fine. They play every instrument very well even the triangle :).
It’s obvious this is not an album to turn the volume wide open and blow you neighbours out of their chairs, but it’s an album you want to listen to for sure.
The fact this album is an abolute must have for the fans of speedfolk, folkpunk and those kind of music is of course a knockdown argument. But fans of Irish folk will appreciate this album for sure and I think people far outside the usual range of fans will listen to this album.
Nice album which will appeal to a large number of folkfans.
For our readers the lack of e-violence might be a small problem, but you can expect this with an acoustic album. All in all a very good job by Fiddler’s Green.