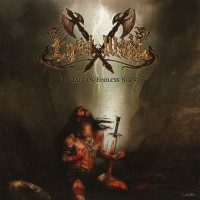 Last Wail, I’d never heard of them until Folk-metal.nl got their CD, isn’t this a shame, or is the debut-album of this Russians worth listening to and should they get more attention?
No fighting warriors or complicated soundscapes, but a nicely played quiet intro, this is nice, they scored their first point at immediately.
The second point is scored at once when the second song starts. Nice speedy, with good screams and very nice whistles. The whistles are beautifully woven into the music, without being the prominent instrument, this sounds very nice. You can’t say the sound is absolutely unique, but no other band crosses my mind when I’m listening to Last Wail.
The following tracks are all nice ones. Nice, solid until the track ´Mystery´, for one or the other reason mysteries are never rough. A nice acoustic intermezzo.
And like you don´t expect raw songs in songs called mystery, you don´t expect quiet songs entitled Merciless. And Last Wails confirms this prejudice and we go on in a solid rough way, and it has to be said, this is where Last Wails good at. After seven nice tracks is seem the Endless Night have come to an end after all, and in style with the intro, there´s an nice Outro.
And after this there´s a nice dessert: the Ensiferum cover ‘Windrider’.
The Russians of Last Wail have made an album which a can highly appreciate and I give it seven point, but they get another bonus-point, because this is an debut-album. I hope sincerely they can keep up this high level in their following albums. Nice one!