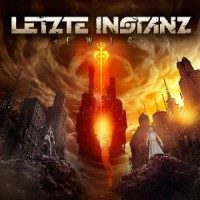 The German band Letzte Instanz presents the end piece of their trilogy. ‘Schuldig’ and ‘Heilig’ were released earlier, and now their releasing ‘Ewig’. This last piece only contains 15 tracks. Letzte Instanz can be seen as one of the mittelalterbands like Subway to Sally, but on the other hand this isn’t a good description. Letzte Instans creates their own style and take lots of strolls down musical lanes of all directions, without losing their typical sound. It doesn’t sound ‘medieval’ or folky but this is on purpose. What has the band to offer for us fan of a more folk-like approach?
The answer to this question is clear, it’s a beautiful and nicely varied album. Maybe it’s not all in our folkhouse but who cares? There are a lot of nice pieces on this album and it is a ‘must-have’ for the fans of this genre.
‘Ewig’ starts of beautifully with the quiet track ‘Aeternitas’. Which is immediately followed by the title-track ‘Ewig’, so it’s obvious the theme is eternity. ‘Ewig’ has this very nice ‘trying to burst out’ thing but this is withhold again and again, very tasty.
The Germans take us along and let us look in the mirror. They show us we think the world is all ours and we can take all we want whenever we want it. They show us we’re ‘Blind’ for a lot of things. They have to tell us something, that’s for sure.
We got all song which are very pleasant to listen to until we reach a terrific highlight with ‘Schwarzer Sand’. A very nice song, the refrain may have a little to popular sound, but the song is very intriguing, it’s interspersed with all kinds of nice little things. Tasty guitar pieces, yummy baselines’, and a beautiful backup by violin and cello.
An apocalypse-like track is ‘Et in Arcadia Ego’, a track referring to the presence of death, according to the paintings of Poussin.
And after this we reached eternity and start all over. ‘Von Anfang An’ is also released as a single.
‘Sing!’ is also a nice track and again the band has an important message for us. Sing if you can’t dance, dance if you can’t sing. Sounds shallow, but the lyrics have far more content, you should listen to them carefully and when you don’t know any German, get them translated.
And that they’re capable of telling a story shows the song ‘Mein Kind’ (My Child), very beautiful song, with a minimal and very sensitive accompaniment a father tries to say farewell to his child. He end with the wish he probably shall sleep away soon to be dream on together with him in eternity… (in German: Ewig)

The band closes this trilogy in a beautiful way with this album ‘Ewig’. An album which will be highly appreciated with the fans off Letzte Instanz. But it’s also for the fans of German rock an beautiful album. Letzte Instanz shows their masters in telling us a story.