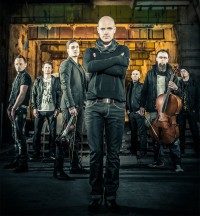 As a little warming-up for the upcoming album ‘Ewig’ we get the single ‘Von Anfang An’. A nice one by these Germans, a catchy song which will enter the German charts for sure. It has a nice quiet start, but it builds up nicely to come to a nice refrain which can be shouted along by their proud fans.
As a second track we get the track ‘Sing!’, another one from their new album. This one is a little heavier and sounds very tight, in my opinion it could also have been a single.
The remix of ‘Sing!’ doesn’t add a thing to this single. A nice extra for the fans, but I will never listen to it again after writing this review.
All in all a nice single, which gets us in the mood for their upcoming album.