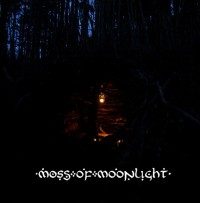 Moss of Moonlight consists of two members from the USA, who play all the instruments.
When I listened the First time to this album I was a little confused. I expected to listen to a folk/black metal band. But the music is a combination of all kind of styles.
The sound of the guitar took me back to the gothic bands of the mid-90’s and especially Tristania. This is combined with a Jew’s harp, throatsinging, violin and all kinds of etnic instruments. Grunt (which I don’t like that much myself, but which work out nice) are alternated with mail and female clean vocals.
The tracks are all very spherical and have melodies that stick. The female vocals are very dreamy and they would lure you into the woods.
In some tracks are tunes with remind me of Oriental atmospheres (Zen) of Irish (Follow the Owl).

Moss of Moonlight debutalbum SEED breaths out nature. The combination of styles is very interesting and pleasant to listen to and dream away from the real world.
The resemblance with Tristania is sticking in my head (but there’s nothing wrong with that!).

“SEED has been planted. Moss of Moonlight’s debut album is now released upon the world. Epic tales of treason, sorrow. and longing; the resistance.”