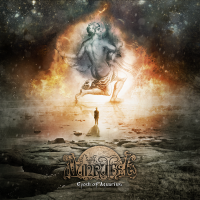 A number of Munruthel albums is rereleased. Recently we published a review on Folk-metal.nl on the debutalbum of Silentium, a project which would evolve in Munruthel later. That album had to be seen as a collector’s item in my opinion. What would this album bring us. ‘Epoch of Aquarius’ was Munruthels third album an was originally released in 2006.
The album begins with warsounds, a nice beginning. Followed by ‘The Raven Croak’, well that’s one for a start. Beautiful vocals of all kinds telling this story, with a almost classical soudning piano and fierce dark metal, delicious.
And while I’m not really a fan of metalscreams and raw violent sounds, the third track can still keep by attention, because I’m very pleasantly surprised by the first two.
And this is a good thing because the titletrack of the album is following this, and where a lot of one-manprojects keep going on endlessly with some tunes, Munruthel shows he has to offer something to the world, beautiful compositions, and this is one of them.
And the CD goes on like this, a pleasure to listen to, until it ends at the epilogue of ‘At The Verge Of The Worlds’. But there is a nice desert for the CD edition (Dead Can Dance cover) and the digi CD edition (Burzum cover), which are both great.
With ‘Epoch of Aquarius’ a beautiful album is rereleased, one who has to be in all collections.