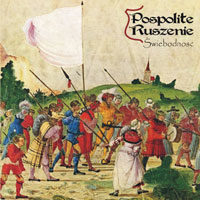 Well, something different now. ‘Swiebodnosc’ by the Polish band Pospolite Ruszenie. Let’s clear up some matters at once. There’s a difference between Pagan- and Folk-metal. Pagan metal is concerning the lyrical themes, they’re about paganisme, old gods and that kind of stuff. In folk-metal this are also theme’s which are used a lot, but the folk in folk-metal comes from folkmusic and says nothing about the lyrical themes.
When we take a look at the tracklist of this EP, the observant reader will immediately notice the words Jesus and Judas in the title of the First track, even if you don’t understand the Polish language. We’re dealing with an Catholic band here. This is something which is a sensitive matter in their own country, but does not have to affect the music.
Pospolite Ruszenie mixes not only folk with rock, but also renaissance- and baroquemusic. The First two tracks of this EP are not folky at all. By the way, the lyrics of the second song are a psalm.
The third track is a nice folky track. In my opinion they have to write a lot of this ones in the future. Quite a merry sound with nice authentic instruments on a solid rock-fundament.
Because there’s only one of these three track with this folky influence, I find it difficult to rate this EP.
As a reviewer for a folk-metalwebsite I can only hope they will write more of this kind of folksongs in the future.