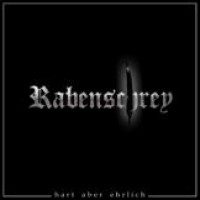 As most people know, the German folk metal scene is pretty big. The typical big names like Subway to Sally, and In Extremo will probably be the first which come to mind for the most of us, but there are more bands in this genre. Rabenschrey is one of them. Do we know anything of them? You could know the strange cover of “Pippi Longstocking” that this band has recorded! After numerous releases this band comes with a new studio album in 2012, “Hart aber ehrlich’. .
And just as the title of their new record, I also need to be “hard but honest”. The CD is easy and nice to listen to, but no more than that. Typical German folk is what we have to endure, with clear influences of In Extremo and Rammstein.
The pace of the CD is high throughout the album, with an occasional full-throttle. The songs are catchy and are nice to listen, but never transcend the mediocre quality. A typical case of “nice, but no more than that.”
All in all a decent release of Rabenschrey. Nice for the fans of German folk for a onetime listening session, but if you don’t, you won’t miss much.