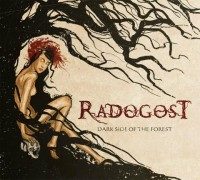 It has been a while since we could listen to something new made by the Polish band Radogost. The previous album was released back in 2008 to be exactly. But there’s no need to wait any longer, because they’re about to release their album ‘Dark Side of the Forest’. Very original, the band made a contest of the design of their cover. And this went well, you can only say one thing about the cover-art: it’s very beautiful.
Radogost already had a nice style of their own: fine metal, interspersed with a lot of violin. And the fans don’t need to worry, this is still what they make. The band has grown, because this album is better than the previous one. The biggest changes which can be heard are the vocals, they are less rough compared to the past, their new singer has a very different voice, but it sounds perfectly to the music.
And we still get a lot of violin, this is clear at the start of the album, when a fine violin-tune hits of, joined a moment later by a good unmetalled. A nice start of the album.
And the band has more to make clear obviously. They don’t want any doubt about the title of the second track. Well, scream it quite a few times, from the beginning of the song and nobody will wonder what’s the title. The refrain sounds a bit Korpiklaani-like, but this isn’t the case with the rest of the song at all. So what remains is a nice track to let yourself go when you’re at one of their gigs, I’m pretty sure of that.
And the band goes on with a number of good metalsongs, don’t listen this when your allergic to violin, but I doubt if there are a lot of folk-metalfans who don’t like violin. You find it everywhere, nice folky, or more classical and even sometimes with a rough metal-edge.
With ‘From the Dark’ the band creates a little moment of rest, but this is also something they do well. Acoustic guitars, campfire-vocals and of course again delicious violin, a very good ballad.
The album ends with ‘Deadly Race Trilogy’ a nice trinity which starts with awesome joined forces of violin and guitar. A very varied epos, nice work of these Polish guys.
And this leaves us only the bonus with the Polish version of the song ‘Radogost’ a nice one, I’m a fan of singing in you native language, and this song proves they can do this in a just as nice way.
Good job of Radogost to have a sound of their own, in this crowded folk-metalworld. Expect no very rough pieces, but solid heavy metal with a lot of violin.
All in all a nice decent album, it has no ‘dips’ and it has a fine own Radogost sound.