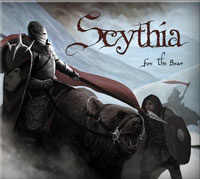 Scythia is one of the bands from over the seas who’re sailing our genre.
With “For the bear” they bring their third album, which is a big step forward.
The second album was, as you can read on our website, a pretty soft album and it lacks the raw metal parts. Not any more! For the bear is an EP which shows us these Canadians have learned a lot in the mean while.

The first song “Sailor’s Accolade” is happening in the year 1516 and it’s about the seafarers who’re sailing from Europe into the west. A cheerful song with a lot of melodic elements because the keyboard is pulled trough really hard. This makes the sound exciting and I’m really looking forward to listen to the rest of the CD. Fierce riders of Scythia is the second song, one of the three songs on this album that they had already, but recorded and mixed again for this release. The style remains as in the first song. This is a big improvement after the first release, which was a bit soft and sometimes even boring, this one is pretty exciting and catchy.
The CD contains seven songs but three of them were on previous records and on is a medley of known tunes. This probably makes you think that the record isn’t that new after all, but the re-recorded songs are much better than the versions I was used to and the new songs are nice and catchy. Still Scythia makes clear that their roots are more based on heavy metal, where most of the folk-metal has more death metal roots. This is clear in the drum but mostly in the vocal work. Scythia has no grunts on the album at all. And in most albums without grunts, I start to miss them in a while, but not on this one!
Last of all I want to mention the Video game medley, a nice song with several common known tunes. I recognize every part of it, but such a shame that even after ten times of listening I still can’t name them.

In the end this is a nice EP that shows us that across the seas there are bands with potential as well. Perhaps not the album you should order immediately for you CD-box, but definitely a band that’s worth listening to!