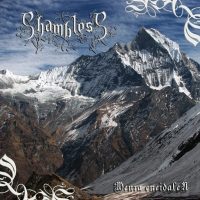 I’d never heard of Shambless before, so I started to listen to it rather sceptical, something I notice I’m doing often. Kind of ‘what you don’t know, you don’t headbang too’. Within a few minutes this feeling was turned around, because I shall not hide behind words: Menra Eneidalen is a true masterpiece, and I don’t use these kind a frases often easily.
The Bulgarian band combines Medieval and fantasy-orientated folk with ham-fisted death metal. The lyrics are in a language invented by the vocalist, drummer, musical brains Arvelss, which gives it an unique atmosphere.

The album hits of with ‘Ishin Esha Is Ruptar’, an epic 10-minutes long composition in which Shambless shows immediately what they are capable off. Heavy riffs which reminds a bit of the old Amorphis and elegant folk-passages follow each other in a seamless way. They’re not shy of speed- or measures and with this opener they almost guarantee an hell of an album.
The second track, ‘Elfin Rumes’ mainly shows Arvelss’ skills as a composer. The long acoustic intermezzo of classical and medieval melodies link the opening track with the rest of this album. The track might be a little long, but it has musical creativity written all over it.
Track three ‘Ara’, grabbed my attention the least. Maybe because it’s the shortest track on the album, and in my opinion the power of Shambless lies in the long tracks, where a lot of things happen without ruining the guidance of the song. Besides this it’s a fine track, a little bit in the shadows of the rest of this album.
‘Erfe Nelekshi’, the fourth track, is the most catchy one of this album. This doesn’t mean the song isn’t complicated. Enslaved-like guitars and sudden atmosphere-changes cause an unpredictable whole. For me ‘Erfe Nelekshi’ is the track which makes this album so great.
Time for an intermezzo again, this time by the name’Eora’. Mysterious notes and sounds are the introduction to ‘Unno Goarin Faratoss’, the darkest track of this CD.
In this track elements from Black metal and classical music can easyly be found. This doesn’t make is less typical Shambless. Hope and despair alternate throughout the whole song, with a lot of epic and dramatic orchestral pieces, exciting riffs and even parts reminding me of fairy-tail park ‘De Efteling’.
The album ends with the longest track Comendalia Inebardes Terbavemora. Another folky, acoustic composition. Again they’re pulling out all the stops to convince us all Shambless is not the average folk-metal band. A perfect finale for an perfect album.
I can’t express how surprised I was with this album Menra Eneidalen. The main focus to improve thing should be on the production, while the songs are all masterpieces, the quality of of sound and the sound of the keys are sometimes are sometimes a little out of place. I can see a nice future for Shambless, if enough people could lay their hands on this record. They have my support!