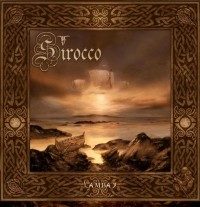 The nice thing about reviewing is that you always get to know new bands. So this time it was the Sirocco, a band I’ve never heard of before. The band comes from the Emerald isle, and they make ‘Celtic Thrash’ as they state it themselves. After 5 years of silence, this band releases ‘Lambay’, the third studio album. I’m curious.

Although the album starts with an intro that sounds a bit like a combination between Alcest and classic doom metal, it’s proven soon that this is not what we can expect from the rest of the album. As the band itself suggests they play ‘Celtic Thrash Metal’, a combination of folk and thrash metal. The thrash influences are obvious. The voice is typical, and sounds the closest to James Hetfield from Metallica. The guitars are fast and powerful, and sound like a crossover between thrash and classic heavy metal.

Enough reference material mentioned, but as you perhaps notice I didn’t mention much about folk-metal. And that’s right, it’s something that’s really missing on this album. The Celtic influences lies mainly within the lyrics.Yet this is a shame because the music is pretty indistinguishable from other bands, and I can imagine that many folkmetal-enthusiast rather don’t pay attention to this release.

In short, I think this album would be received better by Heavy Metal or ThrashMetal fans instead of folk-metal fans. The songs are a little long, and can’t interest for the entire duration. Better to ignore this!