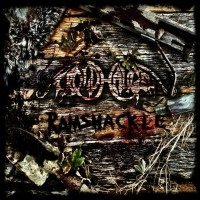 Ramshackle is the title of the new is album by the Australian band Troldhaugen. According to the band they make music for the fans of Finntroll, Frank Zappa, Dimmu Borgir and the Muppets.
About the first song ‘Beneath the Festering Marsh’ we can be very clear. It has a high amount of Troll, they’re wandering with their typical trollish walk accompanied by a delicious weird violin-tune. The link to the troll part of Finntroll is made clear.
‘The Circus of Misery’ has a similar trollish tune, but we can also hear other influences in this one. The track has indeed weird Zappa-like tunes. And this sounds very strange, especially because it has also heavy orchestrations in it. Very original!
‘Beast Wagon!’ has again this Zappa-feel, I never knew Frank had trolls in his family, but it seems they’re on good terms. And I can see a bunch of merry muppets riding around on this wagon too.
By now it’s obvious all kinds of madness from all over the world is united in Troldhaugen. In the next track again weird tunes, but also the title ‘Slaughterhouse Swing’ is in style.
‘Corpsefed Cauldron’ is rather solid for this album, but also in this track thing are not what they seem to be.
When the track ‘Maple Leaf Rag (Scott Joplin Cover)’ I should not try to read this out loud, because you have a big chance the track is over before you’re finished. Nice joke, but no more than that.
The following track is also very short. The album has a little dip here. This and the previous track seem to be just to fill the spare time on the album. And also the next track ‘Swampstomper’ isn’t one of the better ones. The typical tunes are back again, but the track lacks the specialty of the other one and that’s called: originality.
But when we arrive at ‘Trollbrawl’ Troldhaugen is back again. Massive orchestrations, weird tunes, cruel vocals. And this time they added a nice troll-choir.
‘Ven’ is a short spherical intermezzo, a nice resting point between all this strange violence, but one who fits nicely in.
The album ends with ‘A Soul for the Taking’ a track in the style of the other tracks. One significant difference: it’s twice as long as the other tracks. We get another weird troll-piece to break the song.

Troldhaugen has made a brilliant album with ‘Ramshackle’. Especially when you take in account it’s a self produced album. They unite all kind of weird things to a very weird and original sound. I can image some people go completely out of their mind with this music. It’s very, very original and it grabs you from the beginning to the end.