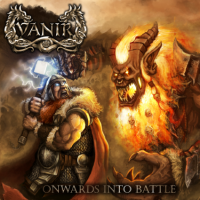 The Danish band Vanir, definitely not to be mistaken for the former Dutch band Vanir. This Danish vikings are obviously strongly inspired by their nationals, Svartsot. Heavy brute music with cheerful folktones and a low growling sound that should be the vocals, definitely something I’m into!

The intro isn’t that good so we can immediately continue with “Onwards into battle”. The first song starts with a happy guitar riff, after which I first check if I had really started the right CD, and it was the right one. The song is much more melodic and the folkinstruments are replaced by Kromlek alike keyboards. A nice song, but not what you expect from Vanir, and secretly not what you prefer to hear from them. When the guitars are fading, it’s time for the second song “Thyrfing”. Just open the song with bagpipes and a growling “HEY” and you really feel the Vanir vibe get in again. As always it reminds strongly of Svartsot, but overall Vanir is just a bit more cheerful and happier. The lyrics of this song are Danish so I have no clue about the awesome sounding sing-along that I’m missing. After this song there are English lyrics as well just as “By the hammer they fall”. Lots of the songs on this record are very catchy and full with sing-alongs, headbang opportunities and awesome moshpitmoments. And Danish, I love the language, it really sounds like a bunch of vikings who come over to tear your head from your shoulders.

However Onwards into Battle is based on the wartales of the vikings, where Særimners Kød was based on their drinkingstories, the music remains happy and convivial. This all until Æresdød, a wonderfull acoustic folksong, which grants an beautiful moment of rest on the album. This rest is something you’d better put to good use because after this song Vanir just continues throwing axes, or vast brutal songs at you!

All is going the way it goes and the album is above my expectations, until you hear: “Raise your horns for Odin! Raise your horns and fight!” because then Vanir is even better then the best! What an amazing song it is! Definitely good for a party and it makes me feel really happy!

With “Fimbul” you have your last rough song because the last part of the CD, “Sons of the North” is a beautiful folkballad. This song gives you the time to enjoy everything you heard on this amazing record!

I remain a fan of rough music with happy tunes, and definitely of brutal low vocals as well. But I really love well mixed music with lots of different elements, without it all being too much as well. Vanir has proved they can do this and even more! If you ask me, you’d better be sure to get this record on your CD rack. And now just hope this Danish warriors will come this way to conquerer the stages of Holland.