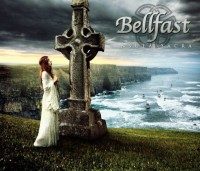 Bellfast, how Irish do you want it? The Celtic cross and the Irish coastline on the cover gets one suspicious.
The album is originally from 2010, but because Bellfast signed with a label it will be released worldwide soon.

The intro of the record is filled with some Irish noises and goes smooth to an progressive sounding guitars in the song ‘that’s Ireland’.
The clean vocals are somewhat powermetal-like and the smooth guitar-tunes support this. Every now and then there’s a kind of spoken text and a light grunt which makes it more interesting. The album is filled with rather long tracks, only the intro and one other song are less then 5 minutes.
The guitar-riffs are catchy and fast (reminds a bit sometimes of Dragonforce) and the flute and violin bring a nice Irish atmosphere.
After some searching I discover the band is from Japan! At once a lot of things fall in to place, regarding the intense solo’s in between.

It’s a nice album, but I can’t digest this easily. The vocals are just a bit too ‘power’ and too ‘Jesus Christ superstar’ to me.