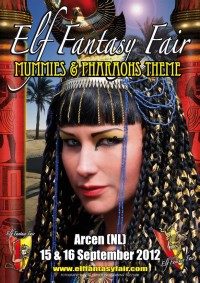 The weekend of 15 and 16 September was again a weekend of the Elf Fantasy Fair. For those not yet familiar with the phenomenon, it is the biggest fantasy festival in Europe, Europe for fans ranging from science fiction to the Middle Ages, from manga to gothic, and Lord of the Rings to Star Wars. This time the EFF settled down in Arcen, in the beautiful castle gardens. There plenty to see and to
do was this year, with many stalls, lectures, workshops, and bands. Although it seemed that there was not much to do for the typical folk-metal fan, there is enough to discover for those who love the softer side of folk. And so it was for me, when I visited Saturday the EFF.

Vroudenspil
After struggling with the program for a while (there were so many things to do!) we decided to go to Vroudenspil as the first band of the day. A motley dressed group with songs that reminds me of the typical German folk bands. The songs were catchy, exciting and the pace was high. Although the public wasn’t present in large numbers, it made little difference to the band. They ran and jumped all over the stage, with one of the band members beginning a polonaise in front of the stage as an absolute highlight. A very nice performance, although the songs sound quite similar to each other!

Sassenachs
That you can’t plan everything on a festival like the EFF was proven by Sassenachs. One moment you are getting a drink, the following moment you’re standing between the drums and bagpipes of Sassenachs. The comparison with Soar Patrol is made quickly, given that they almost sound the same. Uplifting music only made by unenhanced bagpipes and big drums. The audience stopped to look at this band in great numbers, and there even were a few people dancing!

Tibetrea 4.5
After a while wandering through the beautiful castle gardens, it was time to head back to the main stage to see Tibetrea. ‘Folk Fantasy’ they called it themselves, probably meaning that you need a lot of fantasy to ever find this music good. This band could be compared the best with the Dutch Omnia. Many instruments on the stage, playing acoustic folk. Although the sound was shrill, almost every instrument could be heard, except the hurdy-gurdy. What really bothered me, was the stage presentation. The band tried so hard, but they couldn’t get even the slightest reaction from the audience. Logical, if you imagined that the audience needed to make ‘forest sounds’ as the intro of the song, or standing like a tree before the stage. Maybe the thought behind it was nice, but it was just painful to see them trying it EVERY song.

And just when we thought it could not get worse, a strange figure entered the stage. Dressed as a doctor, with tousled hair, he tried to entertain the audience. Tried, because the only one who thought he was funny ought to be himself. Extremely irritating and annoying, and that between every performance! That made us decide to quickly walk away, looking for things that were better to endure.

Teetotallers
And another band that you suddenly encounter along the footpath! The Teetotallers is a Dutch band that play those typical Irish pubsongs. A very cozy and casual performance, where the band took the time to chat with the public between the songs. The band played enthusiastically, and even convinced some people to start dancing!

Punch ‘n Judy
The undisputed headliner of today was undoubtedly Punch ‘n Judy. Enthusiastic crossover folk brought by five even more enthusiastic men. The sound during the band was good, although the bass was a bit on the heavy side. The audience was present in large numbers for the first time of the day, and it took little effort for the band to make the crowd react enthusiastically. And how couldn’t you, with a band jumping so energetically around the stage? A more than worthy ending of the day!