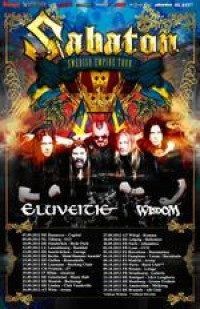 It is not so long ago that Eluveitie played in the Netherlands, but now they are back already. This time not as the headliner of Paganfest, but as a support act for Sabaton. Together with Wisdom they had the chance to open for this powermetalgiants. Maybe not the most logical combination, but it promised to be at least a beautiful and varied evening.

When I walked in, I swear I saw Hammerfall on stage saw. With a little inquiry it revealed that this was Wisdom.. But hey, almost all power metal sounds identical, right? Especially if each cliché is followed by another.

After half an hour clichéd power metal it was time for what we initially came for; Eluveitie. This band has proved to be immensely popular, looking at the many Eluveitie-shirts, and the huge crowds in the hall.
This performance, however, was a series of disappointments. First, the sound wasn’t good at all. It sounded very empty, and occasionally even chaotic. Chrigel (vocals and traditional instruments) stood too soft in the mix, while the drums were too loud. The empty sound was probably due to Padé (bagpipes and flutes), who wasn’t here this time. Thereby they missed an entire section of the typical sound of Eluveitie.
And last, and perhaps most important point. The setlist. What a disaster. 7 songs were featured, of which 5 were from Helvetios, and one of the Early Years. However, the song from the Early years was ‘Divico’, which is actually a new song. This was a disappointment for fans of the older work. The only ‘old’ song that was played was ‘Inis Mona’, leaving classics like ‘Tegernako’, ‘Slania’s Song’ or ‘Your Gaulish War’ completely excluded. As I already heard someone say, this show could literally and figuratively use some more ‘Spirit’!
What a disappointing performance of Eluveitie. The combination of factors ensured that this performance could not compete with the band that played afterwards; Sabaton. These guys showed how it should be done, and gave an almost perfect show. What a pity.