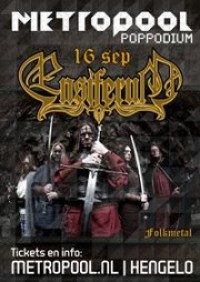 The tour to promote Ensiferums new album travels throughout Europe and on Sunday, they visit the city Hengelo.

Profane Omen was kicking off, these enthusiast guys had just started when we arrived. The band played a mix between melodic death metal with core. Though the frontman did a great job, he did not get that much response. The hall was still empty and the people who came on time to see them where not in the moshing and headbanging mood yet. But opening a concert on a Sunday evening, there’s not much glory to gain from that at all I suppose.

Amoral was the second band. I was wondering if we were watching a metalband or a popband? In Finland they probably call this pop, but in Holland it’s still metal I guess. They had obviously rehearsed very hard on their podiumpresentation, because the band was playing there smooth and cliché music. A singer with a cap backwards and big sunglasses? I was very happy when he put that gear away. But I must confess, this boy had an amazing voice! I especially liked his grunts, which he should use some more in my opinion. A band who can probably have hits in the finnish top 25, but for me personally it was just a bit too much what sells good.

Then it’s finally time for Ensiferum, the reason why so many people came here tonight. It’s not as crowded as I’m used to in the Metropool but for a sunday evening there still are quite a lot of people.
A new intro, new outfits and opening with a new song. In my sword I trust, personally I found the new album a little disappointing anyway, but this song was doing good for me live. But I got really excited when they played their second song. It was a very old song and I saw many faces who didn’t recognize it, but for me, Guardians of Fate is still one of their best songs! Ensiferum played an amazing set with many of their known songs like Hero in a Dream, From Afar, Twilight Tavern, Heathen Throne, Lai Lai Hei, One more magic potion and Blood is the price of Glory. Songs that everyone loved and that was really obvious in the crowd, there where many moshpits, headbangers and everyone sung along. Unfortunately they were playing new songs too like Burning Leaves, Unsung Heroes and at its worst, Pohjola. The new album disappointed me again. At the From Afar tour, even with the new songs, everyone went completely insane and it was one big party during all of the new songs, with Unsung Heroes everyone used the new songs to relax a bit and drink a beer.
What else can I say about Ensiferum what you probably don’t know…. I think that everyone knows by now that when these guys and lady get on stage, the sounds is just great and everyone gets enthusiastic. Concerning these things this was just another amazing show! These musicians are adjusted so greatly to each other, it’s awesome to see that in a band. Something what struck me was that Samy, the bass player, took more the role of frontman. He was speaking and making jokes to the public a lot. That’s what Ensiferum actually missed a little bit before, so praise Sami for that!
And ofcourse Ensiferum won’t leave before they play the tune that everyone knows: Tatatata, tatatata! Iron!
And after a lot of crap and weird tunes and riddles these Finns say farewell.
The last part was a bit double for me. On the one hand it was funny and I enjoyed them doing that all. On the other hand, the entire crowd was shouting to play Into Battle during the entire concert, and in the long time they where actually playing nothing at all, they could have played Into Battle as well…

But in the end this is a more then just successful evening, because one thing must be said, I’ve never seen Ensiferum giving a bad show!
Score: 8/10