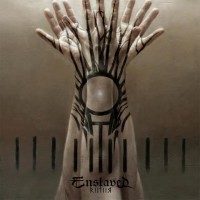 There aren’t many bands which affect me as much as Enslaved does. Since Axioma Ethica Odini the Norse have a well deserved fixed place in my play-list and not much later I was addicted to the thing called ‘Enslaved’. It’s not surprising I jumped almost though the ceiling when RIITIIR was announced. It’s difficult to predict in which direction their Music is going. There aren’t many bands which have this much progression without leaving their roots, and RIITIIR is no exception to this.

Something which can directly be noticed, with Axioma Ethica Odini as the most relevant point of reference, is the sound of RIITIIR which has become much more raw and brute. It all sounds more organic and less over-produced. This has positive and negative aspects, the precious album sounded more as a whole, RIITIIR is more a collection of loose songs. Very strong songs fortunately, which wouldn’t be put down this nice and convincing with a too slick sound.

Love it or hate it, Enslaved has given the clean vocals a larger share on RIITIIR, larger then in any previous song. This brings along a lot more melody and emotion, which gives in combination with the dark riffs and raw black metal-screams an unpredictable but very right and catchy songs.

And also on the progressive side the band has found more extremes. Enslaved was of course always a progressive black metal-band, but this qualification is a little too simple nowadays. Enslaved is playing symphonic-progressive-psychedelic-doom-black-stoner-pagan-metal, and it works out right.
With this release Enslaved proves they are an always evolving unit, which is, besides being one of Norwegian best black metal bands, breaking a lot of barriers in other genres as well.

They might not have been successful in outdoing their previous album, but with a band like Enslaved, you know for sure the next masterpiece is never far away. In the meanwhile RIITIIR is an ever-so-nice addition to their fantastic repertoire.