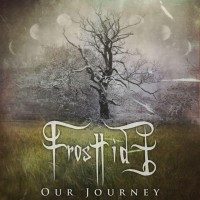 Last year it seems the smaller ‘underground’ bands produce very good albums compared to the products of the ‘larger’ ones. And then we also got an album of Frosttide. Their previous songs sounded nice already, and now they’ve released without the help of a label the EP ‘Our Journey’.
We’ve got a very good album with ‘Our Journey’ and when you listen to it, you don’t have to look up where they’re coming from. This must be Finland. They’re nowhere in the entire album an imitation of bands like Ensiferum, Brymir or Wintersun, but it’s obvious they’re rooted from the same soil.
Nice rhythm guitar, fierce little riffs which reinforce the heroic feel of the lyrics. A tough and raw voice, and this all on a solid base of drums and bass.
Despite the fact there’s no song on the album which is extremely good, all songs are of high quality. Five tracks which are deservedly selected to be pu on this album.
The band sounds very grown up and they obviously thought their music over. You can accuse them of contrived of rattled off songs.

Frosttide has released with ‘Our Journey’ an EP which puts them at once between the big names like Ensiferum, Brymir and Wintersun. This band obviously deserves a decent label which takes good care of them. A very strong and well balanced album.