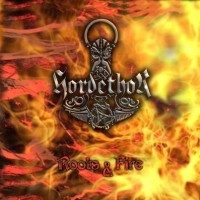 A special release of Horde Thor. 2 EP’s, which together form one full-length album. After a demo and first full-length, last year Horde Thor released the first part ‘Roots’. In 2012, ‘Fire’, the second part was released which completed the CD.

What Horde Thor brings us is rousing folk metal from Colombia. Strongly inspired by European bands like Trollfest, Arkona and Amon Amarth, these influences could be clearly heard in the music. The music sounds exciting, occasionally even swinging. The leading roles are played by the melodic guitar lines and the bizarre vocals (in a good way!), Ranging from deep growls to high screams. Occasionally there are clean singing parts which complete the music.

Roots & Fire are separately released, but does this mean that there is a big gap between the two records? Luckily, that isn’t the case. The two EPs form a beautiful whole, with Roots generally being more cheerful, and wherein Fire is more towards the harsher side.
A nice, complete release of Horde Thor. It gives a multifaceted picture of what this band is capable of, and that’s quite a lot! For all fans of the above influences, definitely take a listen!