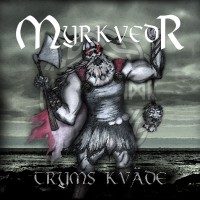 Myrkvedr, a band name that is surprisingly similar to that of ‘our own Dutch’ Myrkvar. However, there is where the comparison stops. Myrkvedr is a quintet from Sweden. Tryms Kväde is the first EP of these gentlemen. Although it was released in 2011, we review it anyway, in preparation for the first full-length which still has to arrive at an unspecified date.

What these guys bring is good, in theory. The ideas and riffs which are presented are not original, but it is nice to listen to. A mix of folk and death metal, as we know it from Amon Amarth. Here and there some similarities with Skalmöld can be heard. However, it sounds so lifeless that it’s hard to keep the attention throughout the album. Mainly the lead guitar sounds very faintly, the voice would be better if it had more power. Also, the production doesn’t really help to cover these downsides.

Not a shocking debut of Myrkvedr. The lack of strength here is the biggest stumbling point. Perhaps they will make it up with their new release, ‘Sons of Muspell’. Let’s hope so, because the band does have potential.