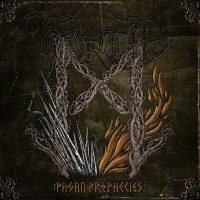 When I started as a reviewer, I thought of myself as musicfan who was known with all bands worth listening to. But this seems not to be true, I didn’t know Fortid yet! Time for a change, and Pagan Prophecies is a nice record to get to know this band.

At first I was a bit shocked by the quality of sound, but when you hold on for a minute, you realize you’re listening to a black metalrecord, and from that moment on this album is guaranteed to give pleasure to your ears. Pagan Prophecies needs some attention to get fully appreciated. After the first time I couldn’t write much more about it then I could about an average pagan/black album, but this description would do no justice to Fortid. With Pagan Prophecies the band proves they’re in the Pagan-area as well as in the Black metal area, a talented and creative formation, able to combine without difficulty elements form the leading bands in this genre to an sound of their own.

Dynamic is the perfect word to sum up this CD. Where there are blastbeats and icy screams at one moment, the next there are spherical acoustic passages with clean vocals. The ongoing changes of atmosphere are very subtle, which makes every song a unique complete whole.
Te seven tracks on this album are quite divers, without being separate, a quality for which I take my head off. Fortid has told a complete story after 42 minutes, with all elements you may expect from a band in this genre, but with skills far above average.

I can only hope Fortid has some more attention for the production with the next album. Musically their doing a very good job, but some elements are lost in the noise. But nonetheless this is a recommendable record for fans of pagan, black and folk-metal. The folk-element may be not very prominent, but it surely can be heard, especially in the last acoustic track. There is a hidden track, 18 minutes long, with sounds of rain and thunder. Not necessary in my opinion on this album, but after 45 minutes of very strong pagan/black metal my mood can’t be broken anymore and it wouldn’t affect my judgement on this album.