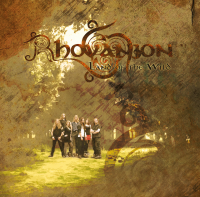 As a Dutch based Folk-metal webzine we’re always very pleased with productions from our own soil. And however are neighbours in Germany are one of the leading countries in this genre we have some very nice bands in The Netherlands too.
One of the youngest leaves on the Dutch folk-metaltree is Rhovanion. A band which uses violin, bagpipe and whistles, the real thing, no keys here. And this is something I like a lot. Another thing I like is originality, so I’m curious.
The frontcover of the CD is very tasteful and quite different. Where we mostly get nice paintings of Kris Verwimp or something like that, Rhovanion has a nice picture of an open spot in a forest with the band-members in it. Nicely done, compliments for that.
The EP starts with Heth, a nice speedy track with nice whistles in it, and a nice folky violin-part. It grabs my attention and I it makes me curious.
The second track Lore Monger starts with an nice slow well done intro, but is evolving in another nice speedy folk-metal song. The folkparts have a nice contrast with the somewhat grim vocals.
The track Rhovanion starts of rather heavy with nice guitarworks but again violin and whistles give this receipt a nice folk-sauce.
When the fourth track ‘Daugobelion’ starts, you know this EP is OK, again a song with nice catchy guitars and nice folk. Very well done.
As tiny as dwarves are as long is the title of the next track ‘Dwarves of Tamlin’s Mountains’, what should you say to this track, see the above comments. It’s not the songs sound all the same, not at all. But Rhovanion has a strong sound of their own, and all this songs fit perfectly in this sound and their all nice too. Rhovanion is nice solid guitars, violin and whistles with somewhat grim vocals. The vocals aren’t maybe not the very best you’ve ever heard, but they give Rhovanion a very recognisable sound.
‘#8’ Is a different case, beautiful bagpipes, and nice harsh vocals, catchy guitars and then again this bagpipe…. Wow, very great song this one!

One thing is weird about Rhovanion, like I said before I like originality. Listening to this EP, I constantly are thinking: ‘hey, Eluveitie, Alestorm, Baldrs Draumar’. This is weird, these bands don’t have a lot in common, nor is Rhovanion playing music like one of them. But there are constantly moments in their songs which remind you of these bands. But does this mean Rhovanion isn’t original? Sure, there are some very nice singel malt whiskeys, but there are also some great blended ones. Rhovanion tastes like a superb blended whiskey, they manage to combine all these elements in their songs and create a sound of their own from it. This makes Rhovanion a very nice band to listen to. And then there’s #8 which song goes in my favourite playlist for sure. A very strong debutalbum.