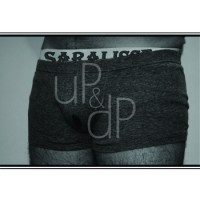 A first impression is very important. It can show you who you are, what kind of music you make, and what audience you are trying to attract. Very useful, mostly. Saralisse is an exception. A white cover with a man in boxers, and on the back four young people doing crazy faces. No, my first impression wasn’t the best of these of these gentlemen, and I was afraid of what I was about to listen to.

And this was actually surprisingly good! This debut EP from the Australian quartet directly tastes for more. Catchy, robust and rousing folk-metal. As they say themselves, they draw their inspiration from European bands, and this van be heard clearly. Here and there some Ensiferum, and some Wintersun sometimes. All put together into a nice whole. Melodic folk-metal with a leading role for the guitar. Also, they frequently sing in epic manly choirs, which is interspersed with grunts.

A nice debut for Saralisse. Musically they’re really firm, with good, decent folk metal. But still, that image huh! Along with the album cover it does a lot off to the image you get of the band. Yet this is still an EP that’s worth to listen to (for free! on Bandcamp).