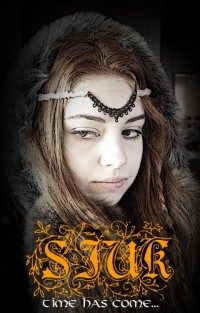 ‘Time Has Come’ is the second work of the French band Sjuk. But the first one was merely a collection of what they did in their early years. Time Has Come is the first real one.
They begin this album with an nice announcement, a fine folk-metalsong where Celtic influences are huge. A nice folk-melody spiced up with good solid metal, this one’s nicely done and very interesting.
Frojd’s Booze, has the feeling of a Western movie. When I close my eyes, I can see someone galloping through the desert.
The Time Has Come, starting with acoustic guitar. It’s all nice and easy and inspired by nature I think. Maybe fans of other musicgenre’s like this a lot, I don’t it goes on on and on. But it doesn’t form a whole with the previous songs.
The bridge between this song is For Our Land, which has this dreamy keys but fierce vocals and solid guitars.
On the Seas is a same kind of song, and I can’t find any info on this, but I get the impression much is done by keys, which gives me the feeling sometimes it’s not real, a bit of an industrial made natural product.
The album ends with the beginning with huge part for an accordion sound, nice with a lot of folk, but without any metalparts.

So we get a nice album with ‘Time Has Come’, but I’m not sure Sjuk has really decided now what they’re going to do. There is a lot of potential in this, but I can’t give a description of their music. I like the Celtic folk-metal ones, but a song as Time Has Come is one I don’t like at all. I think there will be also fans of songs like that, but in my opinion Sjuk has a decision to make what they’re going to do. And although the folk-metalworld is becoming crowded, they can fill in a nice place with their Celtic approach.
Sjuk leaves me with mixed feeling with this album, very good Celtic Folk-metal on one hand, on the other some songs which too different. I’ll sincerely hope their next album is full of this Celtic Folk-metal, because I like that part of the album very much.