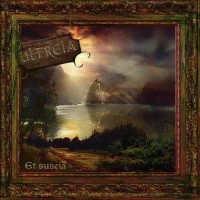 Et Suseia is the third album of the Spanish band Ultreia. Don’t expect very rough work by this band. They mix folk, with little metal and a lot of rock. Although I think the tittle-track is by far not the best track of this album, and again you can hear immediately what you can expect from this band. In Et Suseia there’s also a very nice bagpipe, which gives it this nice folk-sound.
We find a very distinctive sound in almost every Spanish folk-metalband. Ultreia has also this typical Spanish touch, but it has more. The bagpipes in La Promesa gives it a very true folksound, very nice. Especially in the pieces with bagpipe it sounds all very nice. The female clean vocals and the clean guitar give it all a nice rock-fundament.
In Utopia there are also flutes added to the sound, they haven’t got a nice place in the production in all spots, but there a nice addition to the music.
And Ojos Verde is also a decent track with a catchy rockguitar in it.
With the last track the band has obviously decided they can also sing in English. ‘I am Free’, witch pleases your ears is the nice bagpipe in the beginning of the song and the nice basslines in the song. The song is a bit different from the rest, but it has a nice touch, although it’s less folky.

This EP is a very nice one for the fans of this kind of Spanish folk-rock. The mixing can be done better is some places, but overall it sounds nice. Very decent album. But I miss the diversity and the somewhat more folky touch of the previous album in this EP.