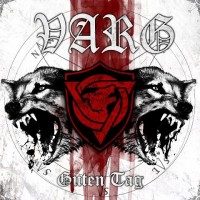 One of my favorite bands is making a new album. So I’m very enthusiast of course. Then you see the title of the album, and you think by yourself, a good day? So I hoped this referred to a common name for a mace, used in Germany and in Holland as well. But Varg used just having a good day several times as subject for their songs before. Then they come up with their cover art and songtitles. A white cover? Songs like Frei wie der wind (free as the wind), Leben (life) and Anti? I’m getting sceptical about all this, and then I get it for a review…

Wilkommen, probably the worse name they could possible use for their intro. So this time not the sound of howling wolves, just some guitar sound and someone knocking on a door.
Then the CD starts off with Guten Tag, well, it’s not such a good day when you hear this.
I’m missing the pagan, the awesome guitar and the brutal growls. But in return we get cliché guitars sounds and clear vocals which remind me of bands like As I lay Dying and Bullet for my valentine.
No, that’s not what a pagan fan wants to hear…
The second song is Frei wie der Wind, and it’s as bad as the name suggests. From here the album reminds me of other German musicians. But I hadn’t expected that of all German bands Varg could sound like, they would remind me of Tokyo Hotel. My mood turns quite sad when I have to work my way through the rest of the record.
Something noticeable is a song like Horizont, it sounds less like Tokyo Hotel, a bit more like the Varg how I wanted to hear them, but by far not like the songs they’ve written before. Where are the songs like Blutaar, Naglfar and Wolfzeit?
The least awful song on the album is in English, something we’re not used to from Varg and because singer Freki’s English isn’t that good, it’s not a plus. But in this song there’s a guest performance from Jonne Järvela. Who seems to be everywhere nowadays. In the end this song isn’t too bad to listen to.
Then Varg goes Monthy Python, and now something completely different… Have you ever wondered what In Extremo would sound like as Michael had a pneumonia? Listen to Wieder mal Verloren. What is Varg doing with bagpipes? Nice try guys, but this only makes me think more like, “why did they make this album?”

With pain in my heart I listen the four remaining songs. So now I can finally come to the awful conclusion that this record is terrible.
Such a shame for one of my former personal favorites!
If there’s any possibility to skip this one, please do, you do better to buy Wolfskult or Blutaar in case you didn’t have that one yet.