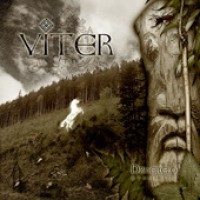 Viter is doing well, their album ‘Springtime’ was a very original and unique. I guess a lot of people think ‘This can’t be nice’ when you hear the term folk’n’industrial, but I can asure you it is.
But when you want to buy their first EP, you discovered it was sold out. But the good new is, there will be a second press of this album. Not only another pressing, but with some additions too.
In contrast to the first edition, the re-issue is enhanced with a remix of Liholesie and a video. The CD is packed in a matte laminated slipcase.
When they made their first CD, the members came fresh from all kinds of bands and were impressed by the Carpathian Mountains, and they sounded nature in every note.
The EP starts with the track Dzherelo, and you experience nature when you listen to it, the sound reminds of a band like Negura Bunget in their better times. Not as dark as they are, but the feel of nature are in both bands a lot alike.
Krov Takae hits off a bit stronger and has bit more the feel of the ‘Springtime-songs’. It swings a lot more and has more power.
Sny Hmar is has again the power of nature, it’s very slow, quiet, it feels like a song to meditate on. In the end it gets nice flutes, but the meditation feel stays.
In Vydridh there’s more metal. And this is also a nice song. With this song the EP ended back in 2010, but the band has added a remix of Sny Hmar to give this EP something extra. This remix has a lot more tension the nature-feel is still in the track, but it’s a very nice remix.

Don’t expect with ‘Dzherelo’ an album which is similar to ‘Springtime’. The style is very different, where ‘Springtime’ sound very modern with a folky touch, ‘Dzeherelo’ has this traditional folksound. The music is beautiful and fans of the old Negura Bunget will like it. The EP breaths nature, it’s almost if you’re in the Carpathian mountains yourselves on your own. And everywhere around you you can hear dripping water, rappids, you can feel the grass, the wind, the power of nature. It’s done with great skill, and in a beautiful way, but I prefer their style at ‘Springtime’ because it’s so unique. And when they should take this new style a little bit more towards ‘Dzherelo’ with some more folk-influences, their style would be perfect in my opinion.