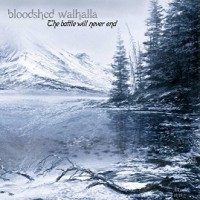 Why would a band name themselves ‘Bloodshed Walhalla’? Was the first thing I thought when I got this CD for a review. My feelings weren’t that positive by the sight of reviewing this record. When it became clear that this band is from Italy, a country where a lot of crap is released when it comes to metal, I became afraid. Furthermore, it seemed that Bloodshed Walhalla was a one-man band, with influences ranging from Bathory and Helloween to Candlemass.. Right.
‘The battle will never end’ is the second full-length coming from sir Drakhen, who plays all the instruments and sings all the vocal parts. What we get is epic pagan-metal, which can be best compared with the old Bathory, with here and there a hint of Amon Amarth. The biggest difference between these bands is the quality of the work. Where Bathory can fascinate throughout the songs, Bloodshed Walhalla can’t. The songs are mostly a tad too long to closely listen throughout the whole song.
What is played sounds descent, though far from original. However, the biggest flaw on this record are the vocals; which sound really pinched and unnatural.
This record is a typical mediocre record. It isn’t good, it isn’t bad, it’s exactly in the middle. A typical record you’re already forgotten while listening to it.