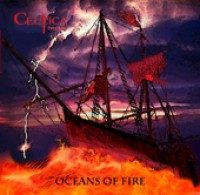 Celtica has released two album until now. Oceans of Fire was their last one and it was released in early 2012.
Their music is not real folk metal, maybe the best description is Rock and Heavy Metal with bagpipes. But not the kind bands like Skiltron play. And this is due to the way they play this. There are no vocals, except for a few songs like ‘Have some Whisky!’ and ‘Aye, Aye, Capt’n’. Where there’s normally an emphasis on the vocals, in Celtica the bagpipes take over this role.
On Oceans of Fire there are a lot of very nice songs. Some are written by themselves, but there are also covers like ‘What shall we do with the Drunken Sailor’ and ‘Loch Lomond’. And very great there is also some humour on this album! And you don’t need any lyrics for that. Listen to ‘Celtica goes to Hollywood’ and you’ll get on an amazing trip through a number of nice movies.
When I heard them the first time, I was quite convinced we dealt with an American band here. But it appears the band is half Austrian and has only two American members. The music is nicely composed, but a little bit smooth, on the other hand all is done with great skill by these fine musicians.
But there’s also something which bothers me. Every time I put this album on I’ll miss the vocals after a few songs. The tracks with vocals aren’t the nicest songs on the album, so they don’t make up for this.
Is this a bad thing? Some will say Yes, but I doubt that. Who’s listening to a complete album these days. Most of the day I’m listening to my music-player playing random songs from a playlist. And when I do this I like every Celtica songs my player brings to me. So I wouldn’t want to miss this album, I like it a lot. It’s a very unique approach and they will do a great job at all kind of festivals with this music.