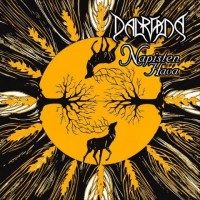 When writing this review, we’re in the middle of October. Autumn started, the days are getting shorter and the temperatures drop. However, that this isn’t the case for everyone is proved by Dalriada, who are releasing ‘Napistan Hava’, for ‘Napistan’ means June.
So, a new album from these Hungarian men and lady. While this is their 7th album already, they’re still waiting for their European breakthrough. Slow but steady the band is growing.
For the ones who are not yet familiar with Dalriada; Dalriada produces a very diverse kind of folk-metal, which can be compared with the Slavic folk-metalsounds. Think of a more melodic version of Arkona, and you basically have the sound of Dalriada. The same as with Arkona the band is female-fronted, presenting a wide range of vocals ranging from screams to clean.
Diversity is the main aspect of this album. Bombast is easily interchanged by more modest passages, happy folk-melodies and melancholic intermezzos. Also within the songs a great diversity can be heard. A lot of different ideas are put in the songs, without losing the sense of the songs as a whole. All-together, this album has the typical Dalriada-sound, though I don’t hear much progression in comparison with the last album. The sound stayed more or less the same, though the traditional instruments get a bit more space on this album. Opener ‘A Dudás’ is a great example of this.
This album from Dalriada is, again, a really strong folk-metalalbum. While there isn’t much progression in comparison to the last album, it all sounds really great. Really recommended for every folk-metalfan!