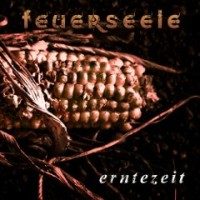 It has been a while since I saw Feuerseele live at Burgfolk. And I liked them then. There was some gossip about an debutalbum for quite a while, and I couldn’t wait, but finally it’s there: Erntezeit.
With the first song Kein Sonnenstrahl is obvious they’re a little bit different from other bands. It’s not Medieval Rock, and it isn’t Folk-metal either. They’re a bit in between.
This is confirmed with the next song Mutter, quite heavy, but with some nice authentic instruments. Feuerseele creates a very nice sound with this. In the next track Ego, where there are a lot of nice bagpipes, they remind me a bit of In Extremo. It’s not they sound the same, but it’s a litte bit the same amount of Rock and loudness. But where the bagpipes form the main theme in In Extremo song, Feuerseele has more room for guitars.
But everything is very well done, Verfluchte Karibik, is of course a kind of pirate song about the Carribean. And this sounds also nice with a lot of Medieval stuff in it.
And by the way, when you love bagpipes, you should listen to Hetzjagd. Nice rock, but when the refrain starts you get beautiful bagpipes. I love this song!
But they can ease it down to, when you listen to the start of the title-song ‘Erntezeit’, you notice they can ease down a bit when it’s necessary.
And the nice bagpipes are back in ‘Fiebertraum’, another very nice song, where there’s also room for violin, and all of this with this solid rock beat…
Tango, is a melancholic song, with of course a beautiful sad violin in it. Not a bad song, but I don’t like it as much as the other songs.
Krieg der Blicke is a song which has a refrain like Vogelfrey does this. And this means very nice. A nice catchy song with a nice amount of humour in it.
But there is more: Fetisch II, which starts of nice with guitar and bass and then the Medievals join in. Very well done, I like this kind of songs a lot.

Sometimes it’s a good thing to wait a little, so you can do everything in the right way. Maybe, the fans get a little impatient, but when the result is good, all is forgiven. And I’ve waited a long time for this album, but it was worth it. They’ve created a nice sound with a lot of rock, in a loud mode, towards the borders between rock and metal, and a lot of medieval instruments.
And all the time we waited they grew and grew, so they have given birth to a full grown baby with this album. They called their album ‘Erntezeit’ (Harvest time) and they know when to harvest for sure. You can harvest when everything is ripe. When you make a debut like this, this is not only a debut but also a statement. Feuerseele is here and I can’t wait to see them on Burgfolk or at the MPS or something.