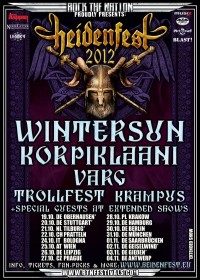 Heidenfest was hosted by the modern location 013 this evening. Where there usually are old factories for this occasions 013 is a very modern venue. Everything is taken care of, you can eat and drink inside the venue there’s enough space everywhere and the sound is very good. You can see everything very well from almost every spot in the hall, but there’s a little space directly in front of the stage which makes it sometimes difficult for large pits.

Arkona
After this it’s time for Arkona, and what a performance was this. Highly energetic like we’re used to by Masha she screaming and singing the roof of 013. The addition of a whistler/bagpiper has grow to be a perfect solution. Where he felt a bit like a stranger on the previous tour Vladimir has found his place on stage now. He has become the side-kick of Masha and contributes a lot to the show. They play a large variety songs mainly form the last few albums but there’s also room for an incidental older song. Besides all catchy Slavic tunes Masha has also the courage to perform a song like ‘Zakliatie’ and this is done with great skill. With a performance like this and an audience which is shouting and clapping and banging along from the front to the corners and even on the balcony there’s nothing which can be done better.
Score: 10/10

Varg
And although we can also grab something to eat in this venue, I like to breath a little fresh air and eat something in the neighbourhood of the venue. The difficulty with this is where to do this in a great line-up like this one. Normally I wouldn’t have done this with a band like Varg but regarding their recent album I decided to eat something now.
When I came back, they were halfway down but still playing. At first I looked at an not very interested band, and the same could be noticed with the audience. When they got to play ‘Wir sind die Wölfe’ they got more response and so they struggled trough to the end of their performance. When they played something form the new album, the crowd was only watching but with every older song they got enthusiast. And there were way to many new songs on their list. They even brought Jonne of Korpiklaani on stage with ‘A thousand Eyes’ and I hope there was someone in the venue who was pleased with this. I wasn’t.
Score: 4/10

Korpiklaani
The last album of Korpiklaani wasn’t their best, just like with Varg. And because of the fact we had an interview with them previous to the gig in which we we’re already told by the bassist he wasn’t to keen on playing drinking songs and they would definitely not play ‘Happy little Boozer’, we were holding our breath with their performance. By the way this interview and the one with Finntroll can be read soon on our site.
They have done a really great job with the addition of Tuomas, the violin-parts have become much stronger in the new songs, but also in the older ones the violin has gotten a bigger part in the overall sound. The first half of their performance wasn’t a lot of fun. There were many new songs played which couldn’t get the audience to party along.
The a little bit over the top was the shouting and screaming of the audience after the solo-performance of Tuomas with his insane Shaman Spell. This song was very very good.
But this overdone reaction of the audience was obviously a signal from them to let the band know they couldn’t appreciate the rest of the show. After this the play-list got a little nicer but it was not what the audience came for.
The lyrics were very monotonous and indeed there was only one ‘drinkingsong’ even the audience shouting ‘Vodka’ after some 45 minutes didn’t help. You can show you disapproval in a lot of ways, but the throwing of a full glass of beer at Jonne was completely unnecessary.
I sincerely hope we didn’t witness a great folk-metalband on his way down.
Score: 5/10

Finntroll
Should the previous two band be an advantage to Finntroll or would it be a disadvantage. You never know what an disillusioned audience will do. But they embraced Finntroll from the start. And Finntroll did the same with the audience. It turned out to be in Finntroll advantage the crowd wasn’t worn out totally which can often be seen at these long festivals. Soon there were many moshpits and a lot of people banging their head of with their infectious tunes. They played a lot of older songs, but also some new ones from their last album ‘Nivelfind’. Of course they had songs like Svartberg and Trollhammaren for us, but they also played a new song from their upcoming album.
And they amazed people with this one. The audience was pleasantly surprised by this nice new one and I’m sure, every Finntroll fan is looking forward to their new album even more.
They ended the show with ‘Jaktens Tid’ along with Jonne who did a nice job with the Finnish folksinging in this song. And also Masha was joining in to bring in some extra power. Very good job done by these Trolls this evening.
Score: 9/10

Wintersun
Sometimes a review can be short. What the hell is a band which only released two album doing as a headliner on a tour like this you wonder? This was why!
The show was just awesome one of the first songs was ‘Sons of Winter and Stars’ one of the greatest song Jari ever wrote. Shivers down my spine, I could only gaze and slaver with this song. These kind of songs are really great at an album but when you can do this live in the same awesome way, I can only bow deeply for a musician like this.
You don’t get a lot of song with the length of song Jari writes, but it was simply great. The show was almost perfect, apart from a few missed notes in ‘Death and the Healing’. Strange experience with a show like this is people standing with closed eyes consuming the music. Their stage-act is simple but nice to look at. The banners with a big tree are nicely lightened and give a nice cold Finnish feel. And you don’t need much more. Jari and the crowd enjoy to see each other enjoying themselves and this gives you the feeling you’re directly connected with Wintersun. Of course also some older songs like ‘Battle against Time’ are on the playlist. There was simply nothing to improve. This was 200% of Wintersun and maximum enjoyment.
Score: 10/10