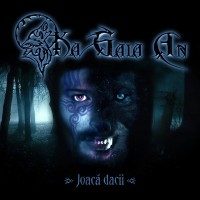 Romanian folk-metal band Ka Gaia An is finally releasing some songs, they start with an maxi-single with 3 tracks.
In style with their Dacian tradition this nice piece of work is entitled Joaca Dacii , (Play Dacians). And they play Dacianmusic that’s for sure. The track Joaca Dacii has nice guitars aren’t very loud but the rock and metal underneath the Dacian sounds is clear. They use typically Dacian style of music to create a very nice sound.
The second track Doina sounds more folkloristic at first but when the nice guitars join in, the folk-metalsound is established. The female vocals have this nice Balkansound which make it all very authentic.
The last track has some more speed and has potention for all kinds of crossovers between metalpits and folkloristic dancing.

Ka Gaia an has made it perfectly clear, they’re here to stay with their Dacian folk-metalsound. Very nice release for the fans of Balkan folk-metalbands. I can’t wait untill these guys release a full lenght album, if it’s filled with these high quality kind of songs, I can only say: Bring it on.