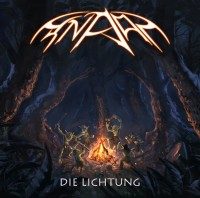 Knaat may be founded by people interested in the music of Equilibrium and Korpiklaani, their music is not like Korpiklaani at all and it’s even not like Equilibrium. The Pagan Metal made by the German formation Knaat is much more like their German colleagues from Finsterforst. A little merrier, but when you don’t know what to expect, this is the best description.
Where Finsterforst uses accordion to spice up their music, Knaat uses keys. But they do it well. It’s no wonder they got to perform at Heidenfest in München rather quickly. Their music is put together nicely. They use the keys mainly to give it all a melodic and epic feel. It’s all a bit folky sometimes too, and that’s caused by the accordion-sound of the keys. The fine sound of the band is finished with a good metalvoice. And there’s another thing which they’re very good at. The songs are brilliant, tracks like Die Lichtung and Schenkentanz are very catchy and nice to listen to. And songs like Sturm auf Windhelm and Nordmannen are very nice compositions with a lot of variation it. And a song like Spielmann will create a huge pit, I’m pretty sure of that.

Knaat knows how to enter the scene, they have made a first album which is simply great. They will please all fans of music like Finsterforst and fans of all kinds of pits with this album. They show at once what they’re up to and they’re in to something big, I’m sure of that. They couldn’t have done better with a début like this.