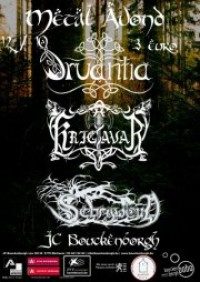 It should have been a quiet evening in the Belgium town Merksem, but there were this hordes of heathens moving towards the youth-centre Bouckenborgh tonight. A beautiful location for a night of Belgian beer and pounding folk-metal. It was clear from the very first minute this would be a big party.

Druantia
Druantia kicked off this evening, a band which I follow enthusiastic from their first gig on. I’ve seen all gigs of this five-piece, but all previous gigs were nothing compared to their performance in Merksen. Where there was a promising band in his early stage before, there was a convincing strong unity this time. They kept the people moshing form the very first note to their last. Druantia proved to be very focused on all things, if it’s about their own work, covers of stage-presentation. Covers as ‘Wooden Pints’, ‘Trollhammaren’ and ‘Wickie de Viking’ were sung along loudly, and they even managed to get the whole venue shouting along with their own drinking-song ‘All We Drink’. A very successful gig, which could have been the final act of this evening in my opinion.
Score 9/10

Krigavar
The second band of this evening was Krigavar, a band which I didn’t know until now. And what a shame, the venue changed also with this band in a permanent pit of sweating metal-heads and flying beer. The folk-elements of the previous band were changed for some tearing black metal riffs. In combination with beautiful violinparts which can easily be compared with a band like Månegarm, they formed a solid and brutal whole. It could be noticed the violist had taken some beers, which he continued to do during the performance, but this seemed to improve his presentation. I was very disappointed to find out Krigavar hasn’t released a CD momentarily, otherwise I would have went home with a CD this evening. A band which is worthwhile to keep an eye on!
Score: 8/10

Schrywoud
The last band of this wonderful Friday-evening was Schrywoud, which convinced me slightly less. It’s obvious Schrywoud likes to get involved in somewhat complexer issues, something which often works out less in a live environment. This didn’t mean they left us with a bitter taste in our mouths. On the contrary, they proved they are very skilful and passionate musicians. The folk-instruments of the previous bands were exchanged for keys, which suited perfectly to their sound, but should have had a more prominent role. The audience was a bit more quiet until the last song, which every knew, because it was the second time this evening, cover of ‘Wooden Pints’. And again there was some heavy pitting, shouting and drinking, and with this a successful evening was finished.
Score: 7/10

The entire evening was very successful, the location was nice, the bands were fine, the audience was fine and the beer was Belgian. The secret formula for a big party which leaves us with a taste for more!