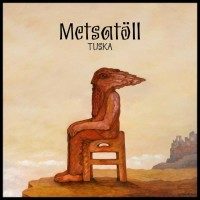 The fans of Metsatöll can’t complain they never hear something of their favourite band. Metsatöll is one of the most productive bands in the scene. They have released a large number al albums, some singles and no less then 4 DVD’s. In 2012 ad a CD/DVD, with the live registration of their concert in Tuska, to this list.
When we got this album we were once again stunned by the beautiful front-cover of this disk. Again this is a true piece of art, very consistent with their style of covers. Simply beautiful.
Then we get to the CD, what can be said about this. Play an almost perfect gig, record it nicely and release it. What more can you wish for as a Metsatöll fan. You get 10 of the best Metsatöll songs played live. The recordings are superb, the quality of sound can compete with studio-albums, every instrument can be hear clearly and this is what you want with Metsatöll. They don’t have this huge wall of sound, there are just guitar, bass, drums, vocals and ethnic instruments, I can hear them all in just the right way.
But there’s more to this album, there’s also a DVD with a registration from the same gig in Tuska. This is how the band describes this, and this is what you get. With two extras: a videoclip of Küü and one of Vaid vaprust. A nice menu in style with the cover, nice and simple. The text in this menu is in Estonian and Finnish which implies this album is meant for the Finnish and Estonian market mainly. By the way the same goes for the booklet. But this isn’t so bad after all. The menu is very clear and simple so I can understand it perfectly, and my Estonian vocabulary is none and the Finnish one has only one word in it, which is kiitos. And that’s the only thing we can say to an nice album like this.
It’s not a flashy DVD but an nice registration of the gig, with multiple cameras, and as said they play this gig in a perfect way and that’s what makes this DVD a very nice one. Simple stage-setting, simple DVD, but everything at a great quality.

It’s absolutely no doubt the fans of Metsatöll shall be very pleased with this album. And they shouldn’t miss out on it. But if you like Metsatöll a little bit, I can advise you: Buy this album. The recordings are so good, you immediately have a ‘Best of..’ album with a very nice DVD attached to it. And I would die to have this cover-art in large format on my wall. Metsatöll albums are the only one which don’t belong in a CD-box, but on your wall.
Tuska is three times Metsatöll at it’s best: Cover, CD and DVD.
And they’re all very Metsatöll: Plain, authentic and with high quality.