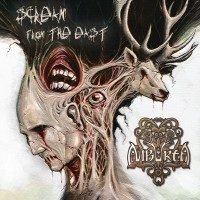 We hear a scream from the East, and I’m immediately sitting up right, what was this sound? A cry for help, a cry for attention, a scream of joy, a battle going on? It’s all of this, it’s ‘Scream from the East’ the first full length of the Hungarian band Niburta.
Niburta is releasing their first studio album with re-recorded fan favorites and new songs.
The album starts with the intro ‘The Descent’ which has this fine Slavic female choir. The next song is no less Slavic, despite of the Eluveitie approach in parts of the song, it has this heavy Slavic feel. The obvious title of this song?: Balcanic Heart.
Nap és Hold is a nice layed back Balcan metal track It makes you dream of easy going people on Hungarian fields. Niburta proves they can transfer images to your mind with their fine music.
With Dance of Satyrs Niburta has a very different song, with good metalscreams and and a fine low voice. Fierce guitars and all again with this delicious balkan sound.
Forebears Dance seems to be a nice old folkloric dance, but it has quite strong drums from the beginning, so you get triggered. Where is this leading us to? But you have to wait until the end of the track to get real metal. And this sounds nice…. wow, very well done. You don’t loose the feeling of an old folkloric dance and get in in metalcoating!
And despite the fact I was awake from the very beginning, but surely since the previous track the sixth track is entitled Awakening. Again they show they obviously listen to their Swiss brothers a lot. But their music is no copy of another band.
Masala hits off very different, but after the intro the beautiful Balcan choir joins their ranks. Very nice song with an oriental feel to it, quite different from the rest of the album.
In Forgotten Path the band immediately hits of with fierce guitars, which are joined by fine whistles giving this song a good folksound. A song which is somewhat more to the metalside, but the balance is restored by the the next song Rege, which starts with almost pure folk. Halfway the song the metal starts in without losing the heart of the song.
Unfortunately we have already reached the last song of this album Sto Imala Kasmet, which this nice female Balcan-way of singing, delicious. I like this kind of songs it, it could have been more metal, but it still it’s nice.

Niburta draw my attention with their ‘Scream from the East’, I turned my head towards the east and was very pleasantly surprised by this album. Niburta has always been a nice band, but with this album they show they can take their approach higher and become a real fine band. Hungary can be very proud of bands like Dalriada and Niburta which are keeping their old traditions alive in this modern days at a very high level.
And talking about Dalriada, it’s obvious when you’re both using old Hungarian music, there are similarities in the music, but Niburta is not a copy of them at all. Niburta has created a very nice sound of their own. Influences of Eluveitie can be heard and sometimes the female singing reminds me of bands like Grai. This doesn’t mean they have stolen a lot from these bands. They have obviously listen carefully to a lot of things they like and blended them in a very nice sound. The band show they can put down a great variety of songs which all fit in this same Balcan-style. It’s Balcan-folk, it’s metal, and above all this, it’s very nice to listen to. Very well done.